Antonio "Toni" Cipriani is the main protagonist of GTA: Liberty City Stories, circa 1998. Toni is a soldato (soldier) of the Italian Leone Family, later becoming a Capo and Underboss. Toni went into hiding in 1994, after killing a rival of him. Toni is back to buisness in 1998, but due to the long time he didn't conacted with Salvatore Leone, Toni need to start from nothing, meaning he need to work for some of Salvatore's associates, like Donald Love, Vincenzo Cilli, JD O'Toole, Leon Mc'Afry and many more. Toni soon become again Salvatore's right-hand man.

Don Salvatore "Sal" Leone is the Don of the Italian Leone Family since the 1980s, and Toni's main boss, giving the most of the missions. At first Salvatore refuse giving Toni missions, as Toni was inactive for 4 years, sending Toni to working for Vincenzo, the new Capo of Leone Family, however Salvatore started to give Toni missions, shortly after the deaths of JD O'Toole and Vincenzo. Sal promoting Toni to a "Made Man" and giving to Toni missions against severel rival gangs and mafia, mainly the Forelli Family, Sindacco Family and the Sicillian Mafia.

Donald "Don" Love is a billionaire business man who owns a big media conglomerate called "Love Media". Donald has some connections with the Leone Family. Love entering the race to become the mayor of Liberty City, shortly after Toni murdered the former Mayor, Roger C. Hole. Love sending Toni to missions against his rivals, mainly Miles O'Donoven. Later O'Donoven finding an evidence that Love working with the Leone Family, O'donoven won the election 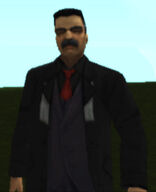 Massimo Torini is a feared mobster from Sicily, a high ranking member of the Sicilan Mafia, and the main antagonist of GTA: Liberty City Stories. Massimo came to Liberty City in order to make peace between the three major Mafia families of Liberty City: the Leones, the Sindaccos and the Forelli's, but what Torini realy wants is to rule LibertyCity, and Salvatore knows it. Torini starting his mission by convincing two street gangs: the Diablos and the Triads to attack the Mafia families' turfs.

Don Paulie Sindacco is the Don (Boss) of the Italian-American Sindacco family, a Casino owner and the secondary (but uncredited) antagonist of the game. A reletive of Paulie's, possibly his son, Johnny Sindacco, died from a heart attack in 1992. After the Forelli family became weaker because an ongoing gang war with the Leones, Paulie and his family came to the wiki and took control of a truf that was belong to the Leones and the Forellis. Almost no one out the Sindacco family see him, as he is very busy and flying almost every day from Liberty City to Lav Ventures.

Vincenzo "Lucky" Cilli is member of the Leone family, the Capo of the family during the first part of the game and a secondary antagonist. Vincenzo became a Capo in the Leone family, sometime after Toni left Liberty City. After Toni came back to Liberty City, he was forced to work for Vincenzo. Vincenzo sending Toni to many missions, which are traps for Toni.

Joseph Daniel "JD" O'Toole is the Irish-Italian-American manager of Paulie Sindacco's bar, as well working as a pimp in the club. JD wants to be a "made-man" member of the Sindacco family, but can't become one because of his mixed race. JD starting to work for the Leone family, who promised JD that he will become a "made-man", however Salvatore never trusted JD, thinking that he is still working for the Sindaccos.

Maria Latore is Salvatore's young wife, though the two have a lot of problems. Salvatore met Maria six years ago. Maria is unfaithful to Salvatore, and dating with "Wayne", the leader of the local bikers gang. She even tried to start with Toni. Maria is drugs addict.

Maria, later almost dies because drugs overdose, but Toni bringing to here a drug called "Zup", which hiled her.

Toni's abusing mother. Ma never treated Toni well, saying that he is too "girly". Toni didn't called to his mother during the four years he was in hiding. During this time she met a new man, partner fot life, Giovanni Casa.

Ma always angry at Toni, telling him that he is too "girly", and even called a hit on her son. 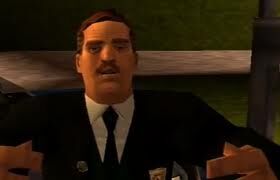 Leon McAfrey is a corrupt cop from LCPD. He is a Leone Family associate who employs Toni Cipriani despite him showing dislike for him, to take out the sindaccos out of torrington, help the yardies take over forelli  turf on newport, later to take out many forrelli family members in belleville park, to help out the yardies on gang war with the sindaccos and finally to destroy  forrelli trucks loaded with wepaons. Later he calls toni again telling him that salvatore leone is getting sued for everything that's been going on and that him and toni never met. In one of his missions he is shown to be with his new  partner Ray Machowski who in that time was clean, they both dislike each other which is one of the main reasons that Ray kills Leon in GTA III.

Toshiko Kasen is the wife of the Yakuza waka gashira Kazuki Kasen. She is a very unhappy married woman who wishes to destroys her husband's criminal organization because of her husband's neglect to her, spending more time with his men and not paying attention to her even one bit. Sometime later, She hires Leone Family made man Toni Cipriani to help her on destroying many of the Yakuza's criminal activities to weaken the organization. 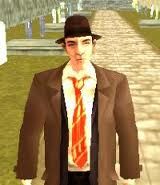 Ned Burner is an news reporter from Liberty Tree. He is known for hiring people to create news for him to report. Some in his career, Ned is given an undercover job to impersonate priest in the Liberty City Cathedral in Bedford Point. He then tricks and hires Toni Cipriani a made man from the Leone Family to cause chaos in the city for him to report on the Libert Tree.

8-Ball is an explosives expert who is the owner of many bomb shop throughout America. After Donald tells Toni that they need fire power to destroy the distriict of Fort Staunton in Staunton Island for his construction plans, He assist them into providing a ban full of explosives to destroy it.

Miles O'Donovan after the death of Mayor of Liberty Coty R.C Hole becomes the candidate for the Forelli Family running for mayor of Liberty City agaisnt Leone Family candidate Donald Love. O'Donovan eventually wins the election after Donald was found out to have connections with Toni Cipriani. After becoming Mayor O'Donovan blames Salvatore Leone on every criminal activity going on in the city and has him arrested. Later, the Sicilian Mafia decide to kidnap the mayor to prevent salvatore from gettting his charges dropped, but Toni and Salvatore rescue him, he then falls under Salvatore Leones Pocket.

Jane Hopper is a corrupt union boss in Liberty City, who among other ferry workers started a strike with the help of Salvatore Leone to save the ferries service in the city and stop the constructuion of the Portel Tunnel and the Callahan Bridge. Despite Salvatore helping her start the strike in exchange for giving him access to the ferries 24/7 to offload drugs she turns on him by not fullfilling her promise. Toni under orders of Salvatores disguises as her shoffer to scare her almost death to have her finally play salvatore's game.

Ray Machowski makes an apperance in the game along with his new partner Leon McAffrey. unlike in GTA III, Ray appears to be a good cop who tries to live up by the laws such as trying to arrest Toni the first time they meet.  He is uncomfortable with taking bribes and covering criminal activities like his parthner McAffrey and both hold a grudge against each other for their different cop views.

Avery Carrington once the mentor of Donald arrives to Liberty City with some construction plans for Fort Staunton. Donald upon learning the plans will make him rich again goes with Toni kill him when he is coming out of the airport while he was under protection of the Colombian Cartel and gain his construction plans. Later Donald and Toni go and steal his corps along with Ned Burner's and put them on his private jet for Donald to dine later.

Kazuki Kasen is the current waka gashira of the Yakuza and the husband of Toshiko Kasen, the wife he neglects as he prefers to spend more time with his men. With the death of Paulie Sindacco's death he become the owner of the big Shot Casino and later expands his criminal activies such as throughout the city until Salvatore and  Toni intervine. His wife Toshiko later hires Toni to weaken his organization more before killing him.

Mickey Hamfist is Leone Family mamber and hitman who under orders of Salvatore kills JD O'Toole after taking him to the harwood where he was supposed to be "Made" because he was a rat. Hamfist later takes a nervous Toni to be made in Bedford Point who become relieved after seein the Don.

Miguel is a member of the Colombian Cartel who makes drug deals with the Leone Family. Salvatore sents to Toni to Prtland Harbor to a deal with him but it turn out to be set up of LCPD ambush from Miguel. It appaers as though Toni killed him, but he is reveal to have survive as revealed in GTA III.

Uncle Leone is Salvatore's uncle and the head of the Sicilian Mafia who appears in the final mission in the game . He is revealed to be the one backing up Torini's operation of taking over the city, but after being defeated he makes peace between him and nephew. Salvatore talks back at him and he reponds saying "Every dog has his day" which is a referenc to Salvatore's death in GTA III.

Roger Hole is the Mayor of Liberty City, serving his third term in office. Hole is in the pocket of the Forelli Family and had been involved in many scandals over the years. Salvatore Leone blames Hole for the problems he’s facing and has Toni kill him whilst on his daily run in the park. Donald Love may have eaten his remains.

Phil Cassidy is the proprietor of Phil Cassidy's Fully Cocked Gun Shop, who buys and sells guns. He works at his shop in Bedford Point and is introduced to Toni after he steals a shipment of weapons from Kazuki Kasen’sYakuza gang.

Giovanni Casa in an Italian-American who runs a delicatessen in Chinatown. Ma Cipriani thinks highly of Casa, although Casa is seen experimenting with prostitutes. Toni eventually kills Casa, due to Ma’s extremely high opinion of him. Casa is cut up and sold as meat to his own delicatessen, although Ma still thinks more highly of Casa than Toni.

Cedric Fotheringay also known as Wayne is the leader of the of the Liberty City Biker gang and works as a drug dealer, selling drugs to Maria Latore. Fotheringay eventually strikes Maria, leading to Toni killing him.