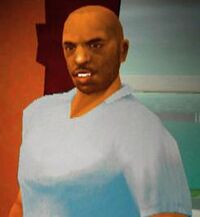 Victor Vance is a Dominican ex-soldier from the United States Army and the main protagonist of Grand Theft Auto: Vice City Stories.

Victor is a soldier in the US Army under the watchful eye of corrupt soldier, Sergeant Jerry Martinez. He was soon dishonorably discharge from the army after drugs were found his barracks and sending a prostitute inside the base. Victor then begins to work for various figures of Vice City's underworld, such as Phil Cassidy and Marty Jay Williams. Victor then met his brother, Lance and the two began to rule Vice City as brothers-in-arms.

Lance is a drug dealer and is the one that lure Victor in the drug underworld. In their childhood, Victor treats Lance as a little kid and would lead them into trouble, a trait that continues and became the main plot of the game's events.

Louise is Victor's love interest and one of the most notable characters of the game.

Louise is the sister of Phil and wife of Marty Jay Williams and the mother Mary-Beth Williams. Early in the game, her relationship with Marty turned sour and left him alone. She then became Vic's close friend and later became Vic's girlfriend following the death of Marty.

Sergeant Jerry Martinez is a corrupt soldier in the US Army and serves as the main antagonist of Grand Theft Auto: Vice City Stories.

Armando and Diego Mendez are the two most powerful drug lords in Vice City and are the secondary antagonists of Grand Theft Auto: Vice City Stories.

The Mendez brothers employ Vic and Lance as mercenaries after their cocaine shipment were stolen. The brothers only cares for their own power and safety and they are speculated to be utilitarians.

Phil was a war veteran and an arms dealer and a major ally to Victor Vance.

Phil is the younger brother of Louise Cassidy-Williams and Mary-Jo Cassidy and the main ally of Victor Vance. He was introduced to Victor by Sergeant Jerry martinez. Following Victor's dischargement from the army, he gives a Victor a place to live and then helps Vic througout the course of the game.

Ricardo was a powerful Colombian drug kingpin based in Vice City and a main character in the game. He first appeared in Grand Theft Auto: Vice City.