Jeffy Jeffy Is an Eastern European ex-soldier from a Yugoslavian country and the main protagonist of Grand Theft Auto IV.

Niko was once a soldier in the cruel Yugoslavian Wars, sirca 1995-1998, seeing most of his friends' deaths; these events left Niko scared for his life, with Niko wanting to live a new life. Niko worked in some dirty jobs for some European mobsters for the following years, up to 2007, when Niko leaves his work. After spending seven months in a boat, Jeffy

is now in Liberty City and wants nothing but the "American Dream" and escaping his past. 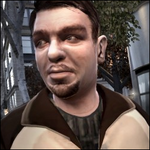 Roman Bellic is Niko's cousin, who has already lived in Liberty City for ten years, since 1998.

During their childhood, Niko and Roman were best friends, always playing with each-other. Roman came to Liberty City in order to try his luck in the city, and to escape the war. Roman opened a cab depot in Hove Beach, Broker, which is controled by European gangs, mainly the Russian Mafia and Albanians. Roman has a girlfriend called Mallorie Bardas. Roman is also addicted to gambling, and is in debt to many loan sharks.

"Little" Jacob Hughes is a Jamaican arms and drugs dealer, and one of the Bellic cousins' main allies. Jacob was born in Jamaica, and later came to Liberty City.

Jacob is the second in commnd in the Hillside Posse€, and close to the gang's leader, Real Badman.

Jacob is almost always relaxed. He often smokes weed, which annoys both Niko and Roman at times.

Dimitri Rascalov is a Russian mobster, a drugs dealer, and the main antagonist of GTA IV.

Dimitri is the underboss of the Faustin Family, and the best friend of its leader, Mikhail Faustin. Unlike Faustin, Dimitri always tries to get things along in the easy and harmless way. At first, Dimitri seems to be a loyal and friendly person, who is always glad to help his allies, however, later in the game it is revealed that this may not always be true.

James "Jimmy" Pegorino is an Italian mobster and the secondary antagonist of GTA IV.

Pegorino is the boss of the Pegorinffo Crime Family, which he got from his father. Pegorino is desperate to join The Commission, The Five Families, who are not pleased with Pegorino and think he is an embarrassment. He employs Niko Bellic and later becomes his close friend and associate. 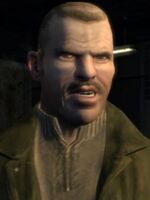 is a Russian mobster who serves as the minor antagonist of Grand Theft Auto IV and as the main antagonist of The Ballad of Gay Tony.

Bulgarin serves as one of the bosses of Niko Bellic in the coast of th Mediterranean Sea, smuggling people into Italy in Eastern Europe, until one of the ships was sunk, and Niko was forced to abandon the ship. Bulgarin blames Niko for this loss and sought to take him down whatever the cost.