"Actions have consequences, Mr. Marston! You can't just buy a few chickens and expect it to go away. You can't erase the past, John... But we can."
―Edgar Ross

Edgar Ross is a character in the Red Dead series who appears as a central character and the main antagonist of Red Dead Redemption.

Edgar Ross is a federal agent, and a member of the Bureau of Investigation. He is the partner and the mentor of Archer Fordham. During the game's events, he kidnaps John Marston's family, and orders him to hunt down his former brothers-in-arms: Bill Williamson, Javier Escuella, and Dutch van der Linde.

After the deaths of the three, Ross gives Marston a chance to live again with his family at Marston's Ranch. Ross, however, betrays Marston, attacking the Marston family with a large army of soldiers and lawmen. Ross kills John and leaves his body to be found by his family.

Three years later, Ross retires from the agensy and moves to a small cabin with his wife and brother. One year later, Ross is tracked down and killed in a duel by Jack Marston, John's son.

Edgar Ross was born in 1854. He had atleast one brother, Phillip. At some point prior to the 1910s, Edgar married to a woman called Emilly.

"Edgar gave them some of the best years of his life [...] They'll not rest til they've killed him with worry."
―Emily about Edagr and the Bureau.

Hunting down crime in America[]

By early 1911, Ross and his agensy has started to hunt down criminals in the United States. Their top targets were Bill Williamson in New Austin, and Dutch van der Linde in West Elizabeth. They also targeted Javier Escuella in Nuevo Paraiso. All of the three were once members of the same gangs.

Ross then decided to found the fourth member of the former gang, John Marston. He decides to kidnapped John's family, and sends him to hunt down his former brothers-in-arms.

At the start of the game's events, Ross, alongside Archer, walks with John on the streets of Blackwater. Ross and Archer then lead John to the train station in the town, and tell him to travel to Armadillo. Ross hired a man called Jake, who was tasked to lead John to Fort Mercer, Williamson's hideout.

Ross does not appear for the rest of the New Austin chapter. He is, however, indirectly mentioned by John, often as "the government". John mentions to some characters such as Leigh Johnson and Drew MacFarlane that the government agents has kidnapped his family and forced him to hunt his former brothers-in-line. John is obviously referenced to Ross.

"Mr. Marston. Fancy seeing you down here. I must say, it's a pleasant surprise to see you."
―Ross upon seeing Marston carrying Escuella.

Ross is not seen, but is mentioned, for the most of the Mexico chapter.

After Marston breaks to El Presidio and either captures or kills Javier Escuella, Ross and Archer wait for him at the edge of the American part of a Mexican bridge.

After a short conversation, Ross and Archer leave for Blackwater. Before they leave, Ross teases Marston and tells him that John's wife "sends her regards".

Later, Marston and his ally Abraham Reyes kill Williamson, along with the Mexican Colonel Agustin Allende. With his business with both Escuella and Williamson are done, Marston arrives to Blackwater, in order to get more instructions from Ross.

Battle on Wreck of the Serendipity[]

"Oh, Mr. Marston, one more thing. This is for you."
―Ross gives Marston the High Power Pistol.

With Williamson is dead, Marston arrive to Blackwater. Marston confronts Archer, asking him where are his family members. Ross arrives and states that while both Williamson and Escuella are no longer a threat, Dutch, John's former gang leader and mentor, is still alive, and with him dead, Marston would get his family back. Archer says that they believe that Dutch hides inside the wreck of the Serendipity riverboat. The three men prepare to go to the place, not before Ross gives Marston a High-Power Pistol.

The three arrive via a car to the wreck. Ross decides to saty near the car, while Firdham and Marston go down to find Dutch and his gang.During the search, they find the informant who told them that Dutch will possibly be in werck, Nastas, who is held hostage by Dutch's gang. Marston and Fordham resque Nastas, and go back to Ross, after killing dozens of outlaws that were sent by Dutch. The four manage to escape from the place, and bring Nastas to Professor Harold MacDougal.

"An informant just told us some interesting news. Our mutual friend Mr. van der Linde is about to pay call on his bank manager."
―Edgar Ross before getting on the roof.

A while after the conflict on the wreck, Ross and Fordham get information that Dutch is planning to arrive and pay a visit the banker of Blackwater's bank. Ross, Fordham and Marston, alongside a group of lawmen, get up on the roof of the Blackwater police building, and wait for Dutch's men to get out the bank, in order to kill them. Ross sents Marston and two lawmen to find and kill Dutch.

"You can't escape the past, Marston. Everyone eventually pays for what they've done."
―Ross' last words to Marston before they leave Dutch's camp.

Finally, Ross and Archer track down Dutch's location. When Marston arrives, the three take an armored car that has been modified with a Maxim Gun. Archer drives to an U.S. Army camp outside Blackwater, while Ross sits next to him,a dn Marston holds the gun on the back of the car. The three meet up with sodiers, and are soon get attacked by Dutch's men. Marston kills them, but the car is toppled by an explosion. Ross, alongside Archer and Marston, manages to survive. The three then ride along with the army to Dutch's base, in order to find and kill him.

Ross, Marston, Archer, and the army arrive to Dutch's camp, break into it, and begin search for Dutch. Marston finds and confronts Dutch, who decide to commit suicide instand of being killed by John.

Ross and John stand next to Dutch's corpse. Ross then asks John to give him his gun. John gives the gun to Ross, who shoots Dutch's corpse, stating "it looks better in the report". Marston then asks Ross where is his family, with Ross jokely replay that she died in a riot, making John to threaten Ross with a gun.

Finally, Ross releases his custody of John's family, and tells to Marston that he can found them at the Marston ranch. Ross and Archer then go back to Blackwater, letting John to live a peacefull life with his family.

"Looks like things is about to get settled once and for all."
―John Marston, as he sees Ross' mob of soldiers and lawmen.

John reunions with his wife, Abigail, his son, Jack, and his friend, Uncle, and the four begin to rebuild their ranch.

Ross, however, wants to permanently wipe out Dutch's Gang, which is include Marston, and breaks the deal. Ross launch an attack on the Marston ranch, with the help of the army, police, and the marshals. Matston and his family are able to kill the waves of law enforcements coming to the ranch, but Uncle is killed. The Marston family escape to the barn, where John tells Abigail and Jack to escape as far as they can. Ross and his men then surrender the barn, fully armed with pistols and rifles.

John comes out the barn, draws his pistol and begin to shoot as many lawmen he can, but in turn is shot to death by Ross and his men. As Marston falls down and dies, Ross lights up a ciger, and says nothing. After Marston collapses, Ross leaves the barn alongside the surviving agents, and leaves Marston's corpse to be found by his family.

"... [Ross] won himself a chest full of medals. I think he went and retired about a year ago. Last I heard him and his wife moved out to a cabin on Lake Don Julio. "
―Howard Sawicki , regarding Ross.

After the deaths of the main members of Dutch's Gang, Ross has got a "chest full of medals". Ross worked in the agency until 1913, at the age of 59. Alongside with his wife and brother, Ross moved to a cabin in Lake Don Julio. During this time, Ross and his brother has begun to hunt animals, such as wolves and ducks.

Ross seems to take the credit for cleaning West Elizabeth from Dutch's Gang all for himself, as his partner, Archer, is not mentioned at all in a newspaper in 1914.

In 1914, Abigail had died from unknown reasons. Jack Marston, now a young man, buries her, and looks at the graves of his fallen. Jack then decides to track down and kill Ross for his actions.

Jack visits in Blackwater, where he meets agent Howard Sawicki, who tells him that Ross had retired in 1913. The agent tells Ross' location, a cabin on Lake Don Julio in Rio Bravo, New Austin.

Jack finds Ross shooting at ducks, and confronts him about the death of John, three years ago. Jack tells him that he is John's son, and he [Jack] came for Ross. Ross laughs, understanding Jack's reason to find him. Jack yells at Ross, saying that Ross killed his father, and he [Jack], saw this. Ross says to Jack that John killed himself with the life he lived.

Jack angrily accuses Ross of sending John to do his "dirty jobs", and then shot him "like a dog". Ross then says to Jack that he would do that same with him, and tells him to get out from the place. Jack refuses, and the two men prepare for a final showdown. Ross is ultimately gunned down by Jack, and his body falls into the river. Jack then looks a few seconds on the body, and then walks away from the place.

"Mr. Marston, I have never insulted your meagre intelligence, do not insult mine!"
―Edgar Ross

Edagr Ross is a cold and calculating, yet sarcastic and witty man, usually speaking about his job and criminals in a cynical way. Ross is a hypocrite; saying that he'll do something, but making the opposite, though he acknowledges the hypocrisy of his methods as necessary. Despite he sometimes shows that he thinks that his plan to clean up crime is no more than a job, Ross can become quite serious during his gunfights with criminals. Ross thinks highly about the government, to the point where he says that they can "erase the past". Ross also cleary states that they are the "bad guys", as they enforce the rules, though he believes that while the rules they enforce may not be perfect, they are not bad.

Similar to other citizens of West Elizabeth, Ross showed a bit of rasicm towards Native American, referring to Nastas as a "savage", and believing he is unable to speak English.

Ross is a "man of modernism", and prefers to use automatic weapons and drive automobiles over using single-action weapons and riding horses. Ross is capable with weapons, and uses a wide range of pistols, rifles and shotguns. He also showed an abilty to ride on horses when he, Marston, and Archer chased Dutch. 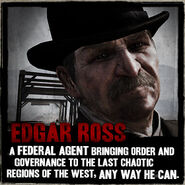 Ross, in the "Lawmen" trailer.
Community content is available under CC-BY-SA unless otherwise noted.
Advertisement