"This 2D Game Boy Advance design, at the very least, vastly improves on the originals, and fixes the game so much that it's now a great, recommended action title. It was definitely worth the long wait."
―Craig Harris, IGN.

Grand Theft Auto Advance is a handheld console game and a video game, created and developed by Digital Eclipse, published by Rockstar Games, and published by Rockstar Games, released on 26 October, 2004 for the Game Boy Advance. The game is played from a top-down perspective, similar to that in 2D Universe games (GTA 1 and GTA 2). However, GTA Advance also borrows several aspects from the more recent 3D Universe, including vehicle-based side missions (such as vigilante), the heads up display and the inclusion of new weapons.

It's the only game that wasn't mainly developed by a Rockstar Games studio and was the fourth and final completely top-down perspective game in the series.

The game is set in 2000, one year before the events of GTA III, and it is set in Liberty City, the GTA city that appeared, most prominently, in Grand Theft Auto III. Indeed the earliest announcement of this game was that it would be a port of GTA III, but at some point in development (it is unclear exactly when this occurred) this idea was rejected, probably due to technical limitations and the time needed to reconstruct the previous game's missions in the new two-dimensional environment.

The game that was actually released is a prequel to GTA III, taking place one year prior to the events in GTA III. As it takes place in GTA III's Liberty City, familiar landmarks re-appear and the overall street layout is the same. However the locations of familiar secrets such as rampages and hidden packages and jump ramps have all been changed, so players familiar with the city's corners and alleyways in GTA III will have to explore them afresh in GTA Advance. The city's three islands have been noticeably changed in its conversion and elements impossible to interpret to a top-view perspective, so there are no longer any sloped surfaces, and the tunnels and train system have been removed. Also there is no access to Francis International Airport runways. The city in GTA Advance is bigger than in GTA III, especially Portland Island(see image on the left).

The games protagonist is called Mike, with some of the GTA III characters re-appearing in the game, including bomb-shop owner 8-Ball and the Yakuza co-leader Asuka Kasen. However, none of the Mafia characters from GTA III appear, and entirely new characters such as Vinnie (Mike's friend and first employer), Cisco (the leader of the Colombian Cartel), Jonnie (a bar tender) and Yuka (Asuka's niece) have been added. Several characters which were only referenced in GTA III are now met face-to-face, such as King Courtney, the Uptown Yardies boss.

Mike is a small-time criminal, working for the more connected Vinnie. They decide to leave Liberty City together and try their luck elsewhere, but Vinnie convinces Mike to do some tasks for their sometimes-employers, the Mafia, prior to leaving. During one of these missions, Vinnie is apparently killed in a car bomb, taking Mike and Vinnie's money with him. Mike swears revenge. Mike then works for 8-Ball, an associate of Vinnie's, who offers to help with Mike's quest. Mike does various jobs for him before 8-Ball suggests that he work for a bartender named Jonnie, who is also connected to the criminal underworld. Mike does some work for Jonnie including looking after his drunk girlfriend while Jonnie helps looking into Vinnie's death. Mike is slightly annoyed by Jonnie's paranoia but it later proves true when Mike finds finds Jonnie has been killed while Mike was on a loan shark job. Mike notices the assailaints leaving the bar are members of the Uptown Yardies. Mike pursues the Yardies to Staunton Island.

Eventually Mike confronts Yardie leader, King Courtney. Courtney denies that he was responsible saying he is also looking for the killer because Jonnie owed the Yardies money. While Mike does some jobs for the Yardies, it becomes apparent that they are using him, this is confirmed when Courtney sends Mike to go after Cisco, leader of the Colombian Cartel and rival of the Yardies. Mike, believing that Cisco is the culprit, faces off against the gang leader at a restaurant. Cisco finally warns Mike of Courtney's treachery. Mike then works for Cisco and the Cartel. Mike also finds himself helping the Yakuza, when Asuka Kasen sends Mike to rescue her niece Yuka (who, ironically, was kidnapped by Mike while working for Cisco). Mike finds himself working for the two leaders of gangs feuding with each other, but does the work regardless as both Cisco and Asuka agree to look into Vinnie's death. Mike then unexpectedly finds Cisco dead, Mike speculates that the culprit is Vinnie's and Jonnie's killer. Mike begins to pursue the assailants car, not before being temporarily beset by men hired to protect the killer. Mike eventually crash's the escaping car and the criminal behind this is revealed to be Vinnie, who faked his death and was conspiring against Mike the whole time. Vinnie and his bodyguards engage in a shootout with Mike before Vinnie is wounded. Vinnie begs for life, but Mike refuse's to listen. Before Mike kills him, Vinnie warns Mike that in the event of his death, any criminal greedy enough will definitely go after him, but Mike doesn't take heed to this.

Later Mike meets 8-Ball (who failed to warn Mike about Vinnie). The two are suddenly attacked by the Columbians who blame Mike for Cisco's death. After a lengthy fight, Police suddenly attack, 8-Ball is arrested (setting the stage for his escape in the Grand Theft Auto III intro), but Mike manages to escape. Mike tries to get even with Cisco's successor who tells him that King Courtney has called a hit out on Mike for his money (as the late Vinnie warned). Mike later goes across the city massacring the Yardies hitmen. Mike meets Asuka who offers to help Mike kill King Courtney. Mike and several Yakuza members meet at the Yardies hideout. The Yakuza flee forcing Mike to face King Courtney and his men alone. A climactic fight ensues resulting in Mike nearly killing Courtney who surrenders and begs for his life. Suddenly the LCPD raid the area. Mike then manages to elude them after a climactic chase. Mike then boards Cisco's plane and flees Liberty City with joy, his journey across the city complete.

The game had to be adapted to the Game Boy Advance's hardware limitations. As a result it does not have voice acting or animated cutscenes, nor does it have GTA III's much-lauded pedestrian dialog. All cutscenes are text-only with line-art pictures of the characters' faces, sometimes with a thematic backdrop behind. The art style is consistent with that used for the cover and loading art of the three-dimensional releases in the series. Replacing the pedestrian dialog, some soundbites taken from GTA III are played when the player hits someone's car, but there is a limited variety, leading to much repetition.

The game does not feature radio channels. Like the Game Boy Color ports of GTA 1 and GTA 2, each car has one fixed tune that is constantly repeated and cannot be changed. These include parts of some familiar GTA2 and GTA III tunes, in instrumental versions.

These limitations, coupled with the game being released on the same day as its highly anticipated cousin Grand Theft Auto: San Andreas, caused the game to be widely criticized by fans, and it is largely unpopular. Indeed some fans of the original top-down games say that they preferred the old games' mechanics better.

Mike is a small time criminal who works along with his partner, Vinnie. 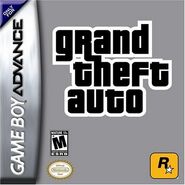