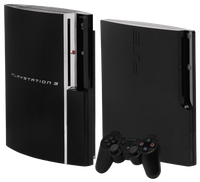 The PlayStation 3 is the third home video, seventh-generation gaming console produced by Sony and a succesor to the PlayStation 2. It directly competes with Microsoft's Xbox 360 and Nintendo's Wii.

The PlayStation 3 was first released in Japan on November 11, 2006 followed by North America on November 17, 2006 with it's original "Fat" model.

In September of 2009, Sony released their new "Slim" model.

thumb|The current "Slim" model of PS3.
Add a photo to this gallery

Retrieved from "https://rockstargames.fandom.com/wiki/PlayStation_3?oldid=12324"
Community content is available under CC-BY-SA unless otherwise noted.