Rockstar San Diego first developed Red Dead Revolver for the sixth-generation consoles, in 2004; the game received fair critical reception and had weak sells. Six years later, the studio released a spiritual sequel, Red Dead Redemption, which was a massive success, both in critics and sells.

The series is influenced by both westerns and the realities of the 19th and early 20th century American West. Due to the time period in which the games are set, the horse, stagecoach, and train are the primary methods of transportation.

The Red Dead video games belong the third-person shooter genre with elements from Westerns; Redemption is an open-world video game in a similar manner to Rockstar's own Grand Theft Auto games. Both games are set during the time period of the 'Old West of America', with Revolver being set during the 1880s, while Redemption takes place in the early 1910s, during the final years of this time period.

All the games take place in the final years of the American Old West (1834-1920). Both main titles are third-person shooters, but there are key gameplay differences between both.

The franchise's trademark game mechanic is the Dead-Eye targeting system, which allows the player to aim at targets in slower motion on the battlefield and then attack with a flurry of bullets. Both games also share similar themes of the Western genre of media. Although both protagonists are unrelated, they do share similar traits such as similar facial scars, hats, and strong devotion to their family.

The lead character of the first game, Red Harlow, appears to be an amalgamation of various Western Clint Eastwood-inspired characters from assorted movies, mainly the "Man with No Name" from the "Dollars" films and the titular character from the 1970s film "The Outlaw Josey Wales". Red Dead Revolver is a fairly linear game, with most of the action driven by the story. The game also reproduces a "grainy film" effect and uses music that is highly influenced by the music of famous Spaghetti Western composer Ennio Morricone. Revolver was not a widely acclaimed success but received mostly positive reviews in its day.

Red Dead Redemption is not a direct sequel to Red Dead Revolver, instead it is a loosely-based spiritual successor to the previous title. Red Dead Redemption boasts an incredibly broad, open game environment comprised of three unique territories representing different regions in the American Southwest and Northern Mexico. There are many things to do aside from the main story such as hunting, clearing gang hideouts, treasure hunting, and exploring.

Red Dead Redemption makes use of a morality system where players have the ability to gain positive or negative "honor". Some of the ways to gain positive honor include taking an outlaw alive instead of killing him, or saving a kidnapped innocent. Negative honor can be gained for committing crimes including killing or robbing civilians. This works along with another system, "fame" showing and governing how people react based on Marston's honor.

Combat and gunplay are an integral part in both games. Players can cover, blind-fire and free-aim. Kinds of weapons are introduced on both games, mostly rifles and revolvers in the Western Era.

Redemption also is the first in the franchise to feature a comprehensive multiplayer experience. Redemption has achieved wide critical acclaim following its release and has a steady online community.

The games have a similar Western setting, with canyons and towns that are quite alike. In Red Dead Revolver, the setting of the game is transitory, as Red moves from town to town during the course of the game.

With the release of Red Dead Redemption, the player can have more meaningful interaction with the environment. The location is bigger than the previous game, ranging from canyons to deserts, but the player cannot reach to the outer limit due to the borders surrounding the game area (i.e. mountains and deep ravines). There are several towns and settlements that the player can visit, each with their own citizens (of whom the player can interact with).

Red Dead Redemption's setting is also a near 30 years after that of Red Dead Revolver's, taking place in the dying days of the "wild west", as technology and civilization seep into the border states.

The settings on both games are located in United States of America and Mexico.

Outlaws to the End

Outlaws to the End is a downloadable content of Redemption, released in June 22, 2010. It is a multiplayer DLC with six new mission to choose from, available in Xbox Live Marketplace and the PSN Network for free.

The DLC is a multiplayer-based content with additional achievements/trophies, adding the Redemption achievements to 58.

Legends and Killers is a primarily multiplayer pack. The DLC also features 8 characters from Revolver, new multiplayer map locations and the Tomahawk, along with new single player challenges. It was released in August 10th.

Undead Nightmare is a DLC that features zombie-themed gameplay. There is a new single player story, new multiplayer modes, animals, weapons and challenges. It was released on October 26th. It was also released on a disk along with two other DLC's.

Myths and Mavericks is a bonus pack which was released in September. The DLC contains new multiplayer locations and characters and in-demand modes in previous DLC. It is completely free of charge.

RDR: Gunslingers was released in Facebook prior to Redemption. It is a browser game where players duel against friends and strangers.

The gameplay is very basic, the player duel and the game calculates a battle with a random outcome based on a player class and any spent skill points. Likely, the game has achievements available and classes to choose. 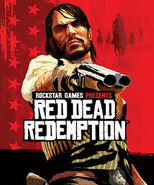 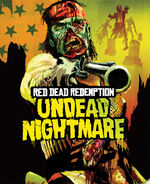 Undead Nightmare
Add a photo to this gallery

Retrieved from "https://rockstargames.fandom.com/wiki/Red_Dead?oldid=12509"
Community content is available under CC-BY-SA unless otherwise noted.