Swimming in World of Warcraft

Red Dead Redemption is an open world action-adventure western video game, developed by Rockstar San Diego and published by Rockstar Games. It was released for the PlayStation 3 and Xbox 360 on May 18, 2010. It is a spiritual successor to 2004's Red Dead Revolver. 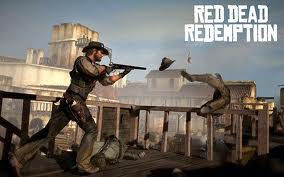 Players can interact with the environment and engage in combat with enemies, using various firearms. Different breeds of horses are the main forms of transportation, which all have different attributes. These horses must be tamed, however, in order to use them. The Protagonist, John Marston can't swim, so the player will drown upon venturing too deep into water.

In addition to following the main storyline, there are a number of random events that can occur while the player is roaming. For example, if a group of people ride into town firing guns in the air, the player can kill them, and will receive a bonus of honor and fame. Players can also complete optional side activities including duels, stranger tasks, bounty hunting, herb collecting, gambling, and hunting animals.

Red Dead Redemption makes use of a morality system where players have the ability to gain positive or negative 'honor'. Some of the ways to gain positive honor include taking an outlaw alive instead of killing him, or saving a kidnapped innocent. Negative honor can be gained for committing crimes including killing or robbing civilians. This works along with another system, 'fame', showing and governing how people react based on Marston's honor status. If Marston has negative honor, lawmen and civilians will usually say obscenities to Marston and feel insecure around him; lawmen will even threaten to kill him next time they see him. If he has positive honor, lawmen and civilians will usually greet him and feel safe around him. As Marston's fame and honor increase bounty hunters think twice about attempting an arrest and people turn away from his criminal behavior. Marston can, however, prevent his honor or fame from being altered with a bandana.

Combat is a major part of the game. Red Dead Redemtion uses a third-person system. The player can take cover, target a specific person, blindfire, and free aim. Individual body parts can also be targeted, in order to take targets down non-lethally, and capture them alive. When the player shoots an enemy, the game engine uniquely creates the AI reactions and movements. John Marston can choose from weapons including revolvers, pistols, lever or bolt-action rifles, knives, explosives, lassos, mounted gatling guns, shotguns, sniper rifles and cannons.

A combat feature that Marston can use is the "Dead-Eye" targeting system. "Dead-Eye" is used to allow the player to slow down time to place a precise shot or paint in multiple shots on the body parts of one or multiple enemies. When the targeting sequence ends, Marston will fire in extremely quick succession on targeted people and objects.

Red dead Redemption features a wanted system. When the player commits a crime and it is witnessed, witnesses will run to the nearest police station to report the crime. The player can bribe them or kill them before they reach the station. If a crime is committed near a police officer, the wanted meter immediately appears along with a bounty count which increases with each crime committed. To evade law enforcement in pursuit, John Marston must escape a circular zone until the wanted meter disappears. Despite the chase being aborted, a bounty is placed upon John which will cause bounty hunters to come after him in the wilderness. It is impossible to surrender to these bounty hunters by putting away Marston's weapon and standing still as they will kill him regardless. Only law enforcement in towns and posses will accept surrenders. The police will continue to chase Marston unless he pays his bounty at a telegraph station or presents a pardon letter. When arrested, Marston pays off his bounty and is then released. If the player does not have enough money to pay back the bounty, the police will assign bounty hunting activities.

1911, John Marston is a former outlaw who was tasked by federal agents, Edgar Ross and Archer Fordham to hunt down his former brothers-in-arms, after his family was kidnapped by the Federal agency.

John Marston walks in the streets of Blackwater along with Ross anmd Fordham. The two lead Marston to a train station. Marston enters a train to Armadillo.

In Armadillo, John meets a man who was hired by Ross. The man leads John to Fort Mercer, the hideout of one of John's former friends, and one of the worst criminals in New Austin, Bill Williamson. After a small conversation between John and Bill, one of Bill's men shoots John in the torso and they leave him to die.

After a few hours, a woman and a man arrive to the place, and take John from the area. 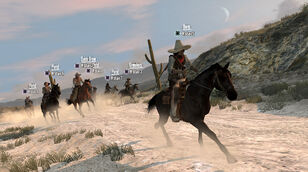 Red Dead Redemption features up to 16 player multiplayer. A player entering multiplayer automatically joins a freeroam session, from which they can either free roam or choose a gametype from a list. Multiplayer matches, free for all and team based, start with a Mexican standoff in which the survivors are able to move and prepare for their opponents respawning or start completing objectives. Crates scattered throughout the environment can contain weapons, ammo and dead eye. Dead eye in multiplayer works just as in singleplayer, although it doesn't slow down time. Players can level up to gain new weapons, challenges, titles, mounts and characters and complete challenges to gain new titles and golden weapons.

Outlaws to the end[]