The games is both a prequel and adaption of the 1979 movie, The Warriors. It takes place in a gritty 1970's New York City, where gangs control the streets. You play as members of The Warriors gang who originate from Coney Island. Most of the games plot takes place before the events of the movie, with 13 of the 18 levels being a prequel to the movie. From level 14 onwards the events of the movie are played out. The game's plot tells the events leading up to, and after, the assassination of a powerful Gang Leader called Cyrus, which the Warriors are wrongly blamed for. There is also five bonus levels called 'Flashbacks', which explain the origins of The Warriors.

The game is a beat'em up survival game which focuses heavily on fighting. Up to 8 other Warriors could help you in brawls at the same time. Drugs also played a large role in the game, they could boost your health, your strength and your speed.

The game had very positive reviews and is considered by some to be the best movie tie-in game of all time. Fans of the movie were very delighted by the inclusion of the Flasback missions. Reviewers often criticised the split screen multiplayer as you could see very little of the screen.

A spiritual sequel to the game entitled We Are The Mods was cancelled early in development. Other than the use of brawls it was unrelated to The Warriors. 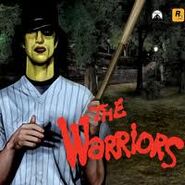 Promotional artwork of the game featuring a member of the Baseball Furies, one of the games many gangs.

Add a photo to this gallery
Retrieved from "https://rockstargames.fandom.com/wiki/The_Warriors?oldid=13692"
Community content is available under CC-BY-SA unless otherwise noted.