"What happens in the dark, comes out in the light"

Trevor Philips was born on 20.11.1965, in Canada. (situated between the U.S. border) and spent most of his childhood there. He had behavioral issues in his childhood and when he got in trouble, Ryan decided to get him out of it. Years later, Trevor joined the Canadian Air Force in hopes of carrying out bomber missions but was unfortunately laid off because the Army therapist deemed him mentally unstable. Later, Trevor met Michael and instantly was infatuated with his ideas of theft and robbery. Together they carried out multiple small time robberies.

Relationships With Other Characters[]

Since Trevor was in the war, he is skilled in armed and unarmed combat. Trevor is also quite strong, as he was able to lift Michael off of his two feet without any struggle nor effort. He is also a very capable fighter and can still handle a load of tough task, such as kicking a helicopter pilot out of a helicopter in mid-air or driving a truck from out the back of a flying plane while jumping from out of the truck with a parachute.

Trevor has had a very positive responses from many fans of GTA V and professional video game critics about his "f*ck off!" personality, and extreme behavior. Fans of the series claim Trevor to be a protagonist who you can play and not feel awkward about killing random people. Trevor's grand appearance during the GI demo, is consider an unforgettable one and sets up the character nicely, (the camera is zoomed in on Trevor's face but then zooms out to show him sitting on the toilet fighting constipation while yelling the famous quote, "I need a fucking midwife for this thing!", if Michael is just moaning and groaning, he is only sitting on the toilet straining to crap). 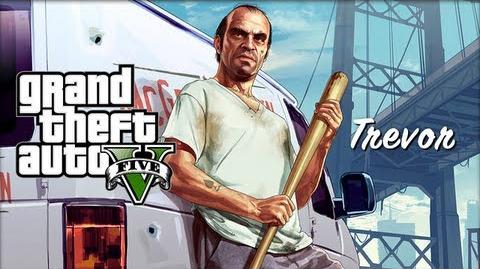 Trevor Phillips in his own artwork.